MARK WONG
​In 2017, I led a review on the study, diversity and ecology of subterranean ants, which was published in the journal Myrmecological News. ​You can read the article here.
​
To promote interest for this understudied and poorly understood ecological community, I later wrote a non-technical essay (loosely) based on the review. First published in Asian Scientist, the essay is reproduced below with links, images and video.

As with most things that escape our view, most of us will seldom contemplate, and perhaps never truly appreciate, the wealth of biological diversity that sits below the ground surface, out of sight and out of mind. However, like buried and forgotten relics of kingdoms past, for millennia the dark underworlds beneath our feet have concealed a treasure trove of primitive oddities and precious misfits – organisms with bizarre appearances and behaviours that have remained unchanged for millions of years, which are also important for our broader understanding of life on the surface. These are the enigmatic subterranean ants.

​To collect and study the tiny ants that live within the dark and seemingly infinite layers of soil is only about as difficult as finding needle in a haystack, blindfolded. As such, researchers have traditionally overlooked this particular environment when carrying out biological surveys. Consequently, the majority of subterranean ants, which live below the ground surface, are poorly known. Many of these underground ants represent entirely new additions to the 15,000 or so ant species known worldwide, and some optimistic ant scientists – otherwise known as myrmecologists – passionately refer to the subterranean environment as the "final frontier" of ant diversity.​

​Many ants in the subterranean layer have a unique physical appearance, and the uninitiated are likely to mistake them for other insects. While the ants that we meet on our side of the world are often leggy, spiny, round-bodied, and red or black in colour, the ants which spend most of their lives underground, known as hypogaeic species, are radically different, possessing short legs, no spines, severely reduced (or entirely absent) eyes, and pale, elongated worm-like bodies. These features help the ants cope with life in a claustrophobic soil environment impenetrable by light, where the only space available is in tiny air pockets between adjacent soil particles and rock fragments. While the ants' short legs and slender bodies enable them to manoeuvre seamlessly through the soil, their blinded and pale appearance – forgoing eyes and body pigment – is very much a utilitarian consequence of not having much need for processing visual information in a lightless chasm.

Examples of hypogaeic species of eleven ant subfamilies. Myrmecologists, can you tell what they are? Answers in the full research article. (Images from AntWeb)
​The little attention given to the ants of the underground is regrettable, especially in light of their significance to many disciplines of research. From an evolutionary perspective, there is mounting evidence to suggest that some of the very first ants may have been subterranean soil-dwellers, before eventually emerging from the ground to colonize the land surface. Indeed, some of the most primitive ants that are still with us today maintain a strictly hypogaeic lifestyle. Consider the rarely encountered, slender and tiny (~ 2 mm) ants in the subfamily Leptanillinae, which sit at the base of the "tree of life" of present ants. Many leptaniline species are only found within soil, where these miniature hunters impressively track, sting and immobilize their favourite (and based on observations so far, perhaps only) prey: soil-dwelling geophilomorph centipedes. Studying the leptanilines and other subterranean ants may reveal important insights into the biology of the earliest ants, which in turn may help us to understand how these organisms have come to successfully dominate almost every terrestrial ecosystem on our planet.
Workers of the leptaniline species​ Protanilla lini (identified by video owner) strategically take down a geophilomorph centipede. (Kazuki Yamamuro, YouTube)
​Several underground ant species also exhibit fascinating and unique mutualisms – or close beneficial relationships – with other creatures of the underworld. Such is the relationship between Acropyga ants and mealybugs, in which young, winged-queen ants jet off from their subterranean nests, carrying mealybugs in their jaws on their flights to faraway places, where they will begin new underground ant colonies with their very own self-contained mealybug farms. Here, the mealybugs shall suck the sap of plant roots, and then nourish the ants with secretions of “honeydew” – a cocktail of the bugs’ excess sugars. Notably, this honeydew-drinking behaviour of Acropyga ants is presumably ancient, as some prehistoric ambers dated at 15 to 20 million years old feature perfectly preserved young Acropyga queens flaunting their carry-on mealybug baggage ahead of a flight. 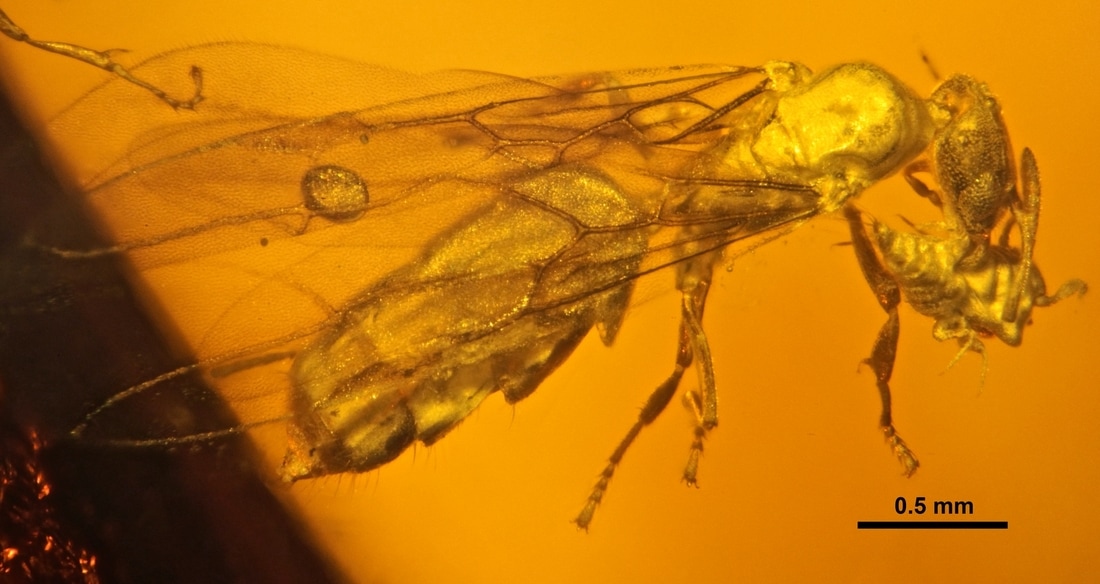 A young queen of the fossil species Acropyga glaesaria sits frozen in Dominican amber with a mealybug between her jaws. (Vincent Perrichot, AntWiki)
​In spite of their potential for advancing many areas of science, most aspects of the biology of subterranean ants remain unknown, and the mysteries shrouding this ecological community have prompted some myrmecologists to devise innovative methods for collecting and observing these enigmatic creatures. For instance, they may use baited subterranean traps, which are often jars or tubes buried underground, containing attractive bait such as tuna or peanut butter, and with holes made in their walls through which ants may enter the device. A fantastic example of one is the 50-centimetre long subterranean probe, which vertically separates into four sections, essentially allowing researchers to determine the range of depths within the soil layer at which different species were collected.

Reserved only for the exceedingly patient and skilled is another collection method known as direct sampling, an elegant but also excruciating process whereby a seasoned myrmecologist such as Dr. Keiichi Masuko of Senshu University in Japan will imagine himself an archaeologist, progressively scraping away (with a trowel) or brushing away (with a paintbrush) layer after layer of soil from the forest floor, and collecting any ants encountered. The reward for his patience? Being able to describe the precise architecture and spatial distribution of subterranean ant nests at Cape Manazuru, Japan, as well as collecting soft-bodied ant larvae which can only be safely retrieved through this delicate and meticulous excavation. 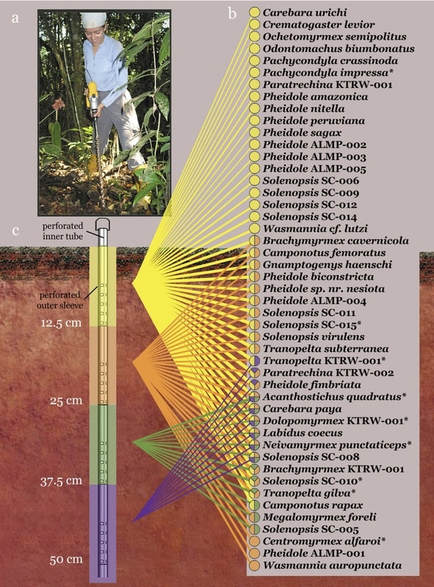 A subterranean probe collects ants from different soil depths. (Ryder Wilkie et al. 2007)
​While such unorthodox collection methods are still relatively unpopular among myrmecologists, results from the few studies using these techniques suggest that entire communities of subterranean ants can be remarkably diverse and surprisingly distinct. For instance, one study in a Brazillian cocoa plantation found no fewer than 113 ant species from the soil alone, of which 55 species were never encountered at surface habitats such as the ground surface, leaf litter and undergrowth. Other studies have uncovered unique behavioural patterns, such as that of the hypogaeic army ants (Dorylus laevigatus) of Southeast Asia, which establish an almost permanent underground network of narrow tunnels that they will routinely use for movement and hunting throughout their established territory. This clearly contrasts their African surface-dwelling counterparts (Dorylus nigricans) which have iconic but short-lived swarm raids through a particular area – perhaps think of the silent and pervasive underground mafia, versus a loud and advancing riot police.
Workers of the hypogaeic Asian army ant Dorylus laevigatus surface from underground tunnels in the night to forage. Rifle Range Road, Singapore. (Mark Wong)
​Not surprisingly, subterranean collection methods have also literally "unearthed" many significant ant species. Some of these were entirely new to science, such as the tiny, slender golden leptaniline species Leptanilla hypodracos, whose name translates to "underground dragon", recently discovered (by yours truly) in a baited subterranean trap approximately 15 centimetres below the ground surface in Singapore. Other ants collected were traditionally considered to be rare or even extinct. Such was the rediscovery of Simopelta minima, a Brazillian hypogaeic species which was lured out of presumed extinction by an enticing mix of sardines and honey in a subterranean trap buried 20 centimetres below ground.

Leptanilla hypodracos Wong & Guénard, 2016. A new hypogaeic species collected from a subterranean pitfall trap baited with tuna and placed 20-centimetres below ground. (Full Article)
​In sum, subterranean ants are amazing, but they still remain a great mystery. Henceforth, any advances in research on these ants – and by extension the many other "forgotten" soil-dwelling arthropods – will hinge upon our willingness and capacity to study such animals in an unfamiliar environment that is hidden from view; a dark microcosm with three-dimensional landscapes which we will find difficult to contemplate.
Publication
Wong MKL & Guénard B. 2017. Subterranean ants: summary and perspectives on field sampling methods, with notes on diversity and ecology (Hymenoptera: Formicidae). Myrmecological News 25: 1–16. PDF. Supplementary material.